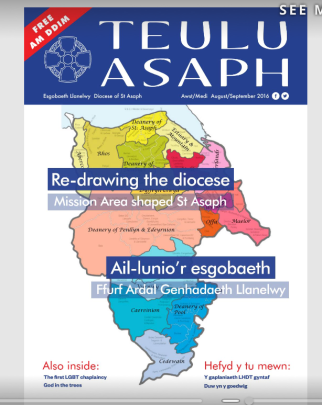 It’s a year ago this month that an article in the St Asaph Diocesan magazine, ‘Teulu Asaph’, caused me so much grief and fury that instead of ranting at my one-and-only husband I began blogging. Since then the decisions that started me raving and raging have become worse and the diocese of St Asaph has become a clique I’m glad to have left.

In May this year Reverend Sarah Hildreth Osborn, Rector of the Benefice of Eglwysbach, Llanrwst and Llansanffraid Glan Conwy, was appointed as Bishop Gregory’s Chaplain to the LGBT community in the Diocese. The latest edition of Teulu Asaph includes an interview with her about her new role. Bishop Gregory has the reputation of being a micro manager and I therefore assume he has vetted and approved the views of his new Chaplain, though I admit I find some of her words and ideas definitely dodgy.

The interviewer’s first question asks what an LGBT chaplaincy is and it turns out to be ‘a safe sacred space where LGBT people can gather to explore their spirituality and be affirmed as created in the image of God.’ Leave out the word safe and that’s a pretty good description of a church. That little word “safe” is another matter; an un-safe word. Attach the word safe to the word space and it means a place for totally mindless, banal, inconsequential chit chat, where free speech is muzzled and any disagreement is promptly labelled hurtful, offensive, racist, homophobic, et cetera.

Clergy colleagues will be able to refer people to her, especially those seeking information about marriage and blessings. I wonder what she’ll tell them. The Church of England is prevented by law from conducting weddings for people of the same sex and the English Bishops have asked clergy to respect their agreed position of not offering a service of blessing in church to same sex couples.

Asked what support and services she will provide Sarah said she will hold a Eucharist specifically for the LGBT community at least once a month. I’ve done some rough sums and estimate there are about 80 people in the diocese who may be LGBT Anglicans. Given the three line whips used by the organizers of Gay Pride marches that should ensure a massive congregation in St Grwst’s Church, Llanrwst at the first service on Monday, September 12th, 2016. I’m surprised that’s what LGBT Anglicans want, since it might be seen to further victimize them by emphasizing the fact they are different.

The advert for this service says all will be welcome. I’m not convinced about that, given Sarah’s reply to the question ‘What do you say to those who will struggle to support this?’ She answers, ‘To those who aren’t supportive, I’d say, “If you’re judging people, you have no time to love them! We need to stop using scripture to hurt people.”’ Does that sound warm and welcoming to you? In any case, it’s rubbish. In the confessional the priest sits as judge of sins committed, while exercising love to the penitent. If that’s too technical read any Gospel story where Jesus heals someone with love and then tells them to go and sin no more.

To the question will she be working alone Sarah replies that it’s just her at the moment because ‘In these early stages, I think it’s important that those leading services are themselves members of the LGBT community.’ Presumably modern clergy no longer subscribe to the Thirty Nine Articles. If she were to read the following she would realise that one’s sexual orientation is totally irrelevant, as is skin colour or even the state of one’s soul.

26 The sacraments are not rendered ineffectual by the unworthiness of the minister
Although in the visible church the evil are always mingled with the good and sometimes evil people possess the highest rank in the ministry of the Word and sacraments, nevertheless since they do not do these things in their own name but in Christ’s and minister by his commission and authority, we may use their ministry both in hearing God’s Word and in receiving the sacraments. The effect of Christ’s institution is not taken away by the wickedness of these people, nor is the grace of God’s gifts diminished, so long as the sacraments are received by faith and rightly. The sacraments are effectual because of Christ’s institution and promise, even though they may be administered by evil men.

Finally, we are told that Sarah has now learnt ‘that God is so much bigger, wiser and kinder than the church.’ Which brings me back to my very first blog where I complained that a story on the front of ‘Teulu Asaph’ made it sound as if God were a sort of Father Christmas figure in a toy shop dolling out whatever a child demands. Bigger? Wiser? Kinder? Is this the message the Bishop wants to spread? These are our ordained clergy, for heaven’s sake. It makes me wonder if they ever bother to listen to the words they say daily?

“For the Lord is a great God and a great King above all gods. In his hand are the depths of the earth and the heights of the mountains are his also. The sea is his, for he made it and his hands have moulded the dry land. Come let us worship and bow down and kneel before the Lord our Maker.”