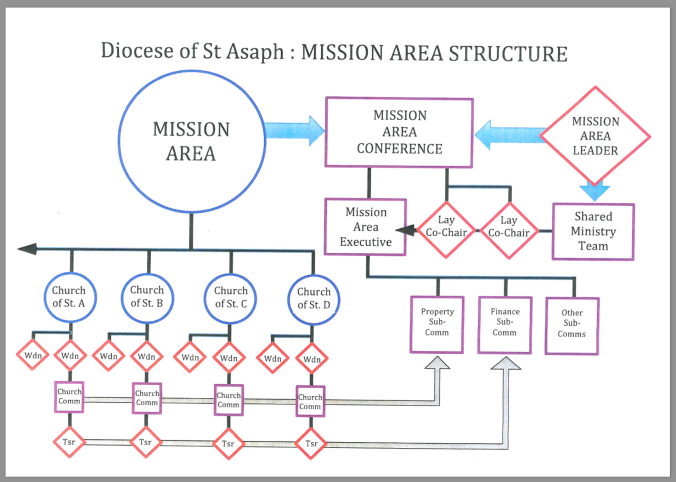 How to save the Church in Wales

Many years ago I read a book called, ‘Weird, because normal isn’t working,’ by Craig Groeschel. I seem to remember it got very weird and I gave up, but since then I’ve often thought of the words of the title.

How long have our clergy been doing normal? By normal I mean the stupid tinkering little changes intended to make church increasingly friendly by becoming increasingly secular. This includes:-

I used to wonder how long it was going to be before Bishops worked out that ‘secular’not only is not working but is actively putting people off. The answer isn’t going to be found in 2020 Vision – Unlocking Your Potential, Toolkit Part 2.

For those who have been lucky enough to miss this blundering step forward in organising a church let me give a bit of history. This particular Vision applies to the Anglicans in Wales, but something like it could well be coming to a church near you soon. The Bishops decided to get three experts to review the situation, tell them why so many people were leaving the church and suggest what should be done about it. We all know what Experts are, don’t we? Ex-has-been; spurt-a drip under pressure. The experts they chose were a former bishop from the dreaming spires of Oxford, a former professor of the London Business School and a former Chair of the Scottish Episcopal Church Standing Committee.

To get information for the Review they had a jolly around Wales, looking at various churches—I hope they took in a few castles as well; that might have given them food for thought—and talking to senior clergy, bishops’ advisers and staff from the Welsh theological college of St Michael’s, which was threatened with closure two years later. They also met 1,000 people in public meetings, which is the worst possible environment for voicing your deepest worries and fears. They then went away and produced a Review, published in September, 2012 which lead to 2020 Vision.

When Toolkit Part 1 of this Vision landed in my lap in 2014 I was secretary to my Parochial Church Council so I had to struggle with it. The Bishop of St Asaph, when promoting this ‘Vision’ several times mentioned the word ‘radical’. Even then my over-riding thought was, ‘Radical is not enough. Revolution is what’s needed.’

Now here is Toolkit 2 – still trying to unlock the potential of the remaining few.

Toolkit 2 is written in trivial management speak. Somewhere there are ‘Greetings in the name of our Lord Jesus Christ’ but if you are hoping for something worthy of St Paul you’ll be disappointed. This kit is definitely modern, secular, of this world worldly.

Here’s an example. “A SAMPLE Mission Area Decree with annotations attached explaining its purpose and effects.”  That’s eight pages (without the notes) of jargon. Skip it. The Seven Steps to a Mission Area has a bizarre fascination. The good news of Jesus Christ is mentioned, just in case we’ve forgotten that all this is happening in an attempt to revitalise His Church. I’ll reproduce Step Four to show what I mean.

A strategic Mission Area Executive (MAE) is formed to look at recommendations and devise a development plan for the first five years. The MAE is accountable to the MA Conference (MAC) and led by a potential Mission Area Leader (MAL) or elected Lay Chair. The Shared Ministry Team (SMT) will represent those who offer a range of ministries. MAs need to be aware of existing training and how to access more specific and effective training to meet the needs of their MA.

The bit of the toolkit I found most fascinating is this Organogram. (The spell checker accepts it quite readily so it must be a real word).

For a start I can’t work out what’s important here. With Flow Charts you start at the top and things flow down. And there are Venn diagrams and Pie charts, where size matters. With MindMaps you put the most important thing, the reason for everything else that you want to say, very big and bright in the middle.

I can see the circle for congregation but it doesn’t seem to be going anywhere. It looks as though they are to be told what to do by the Church Committee (CC) and the Mission Area Conference (MAC), which may or may not include any ordained clergy, while collections of multi coloured conferences, groups, boards and teams float around doing – what exactly?

Toolkit Part 1 had plenty of photos to jolly things up. However, most of the people sitting around tables consulting about their unlocked potential looked a lot like me. My age, my shape, my look of bewilderment. At my time of life I can’t cope with organograms, or MACs, or EMAs or modern toolkits that don’t even include a spanner to throw into the works.

After I’d written the rough draft of this blog I started to wonder what would happen if the Bishops and the Deans and their Chapters (DCs), and the Archdeacons and the Area Deans (AADs) and the Chaplains and the Licensed Ministers (LCs) and the members of the Nurturing Steering Group (NSGs) and all the other people in those circles, were to put on their cassocks and robes, best suits and smartest clothes and go into town centres and up and down village streets telling people about the simple rules for a good life in that little book called the New Testament. Of course they would all be arrested. That’s the point! Can you imagine the headlines? The list of broken laws would be long, beginning with breaching the peace for preaching it.

That would be eccentric and anarchic and it might just work.

One thought on “Eccentric and Anarchic”