Keeps a girl bright and gay*

*Gay meaning “merry and lively” as it did when I was young. At college I had a friend who had been christened Gay. I wonder what happened to her. 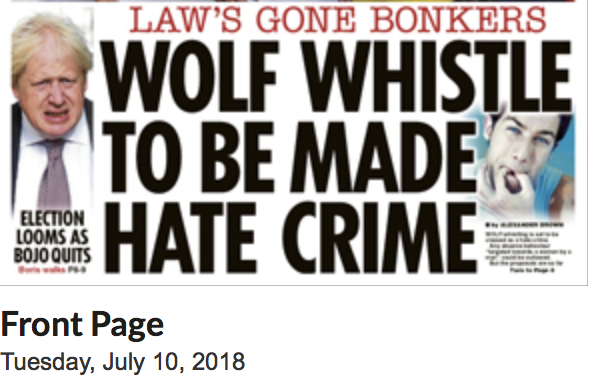 That was today’s front page of the Daily Star. I’ve never really trusted them since they told me that knitters and bird watchers were ashamed to admit to their hobbies. I do both avidly and don’t care who knows it. But after ‘up-skirting’ I’m afraid what The Star says may be true.

I am not ashamed to admit that I was always delighted to get a wolf whistle as I walked passed a building site, nor did I get offended or feel degraded by the sight of a “builder’s bum”. 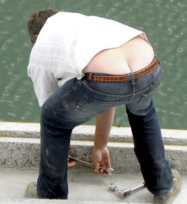 I suppose I’m lucky. I’m too old or too stupid or too much of a mis-fit in modern society to recognise most hate crimes. That’s why I thought making ‘up-skirting’ a crime was equally bonkers. Well, I did, once I’d found out what the word meant. Should it come into law it could carry a two year jail sentence and life on the sex offenders’ register.

I would have thought taking photos up women’s skirts was already an offence under existing sexual harassment laws.

Where I live, if I’d been burgled two years ago, the criminal had only a 16% chance of being caught. With so many extra hate crimes being added to the statute book the police will now have even less time to investigate minor annoyances such as robbery, burglary, larceny, theft, motor vehicle theft or arson. That worries me much more and would cause me infinitely more distress.

The reason I’m not very sympathetic is because it seems so incredibly infantile. I can remember male people looking up female people’s skirts but that was in the school playground when I was seven. It was the sort of stupid thing boys did. There were various responses. You could burst into tears and tell teacher. You could be outraged and tell teacher. You could push him over and get your mates to stand around and laugh. On the whole the third option worked best.

Will de-bagging become the next hate crime, I wonder.

I used to live next to a big teaching hospital. At wild parties the female nurses took great delight in de-bagging innocent young male doctors. One night, a naked junior registrar escaped into his car but on a sharp corner lost control, shot through a fence and landed up in our garden. It was on a private road so the police couldn’t charge him with any motoring offence so they arrested him for indecent exposure. I assume that is still a crime but is it a hate crime?