I more or less gave up blogging last Autumn. I had a little flurry of activity in August when I posted four blogs in quick succession, and a re-post. Then nothing. 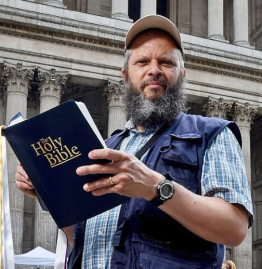 The first of the August blogs recorded my difficulties in trying to spend some of the £10 million that the Church in Wales was giving to us for evangelism.

This is Allan Coote, a London bus driver, reading the Bible outside St Paul’s Cathedral last summer. But only for half an hour a week. The Dean and Chapter can’t cope with more than that.

In the second blog, among other things, I was expressing amused disbelief that the Freemasons had voted to include women—but only if they had first joined as men! The third blog, entitled ‘The Absurdity Goes On’ and posted on the same day, was inspired by a row over a wall plaque in York. It was to honour somebody called Anne Lister who was apparently the first famous English lesbian. The row erupted because the word lesbian did not appear on the plaque for fear of causing offence.

The fourth one, Storm in a Teacup appeared on August 11. It concerned the furore caused by Boris Johnson’s comment that a woman in a burqa looks like a letterbox. Actually he wasn’t completely correct. He meant the niqab – the burqa doesn’t have a slit in it.

Well, it was the silly season. So I decided to enjoy the summer and write again when I felt inspired. I re-posted one more blog – Tommy Tubby Again – on 28thSeptemeber as a tribute to my father. On September 28, 1918 he won the DSO. It was also his 25th birthday. After that nothing inspired me at all.

Three things have brought me back.

The first was checking my blog site for the first time in three months and discovering that people were still reading me. December 21st was the only day when I didn’t have a single visitor. Sometimes, someone obviously settled down to read many blogs one after the other. And when I counted I discovered I have readers far from the boundaries of Wales—in 28 different countries, in fact.

Well, I thought, perhaps I have still got something worth saying.

Secondly, serendipity. Several times in the last couple of weeks I have come across words and phrases, especially in the psalms, that seem to be nudging me to stand up and be counted.

And thirdly, the nudges and winks from my dear friends in Cardiff.

However, to be honest, I have nothing new to say. I still have just three things that I think are of fundamental importance.

The love of God as revealed in the Scriptures

Traditional marriage between a man and woman for the sake of family life which is the bedrock of a civilised society.

So while I’m wondering where to begin I am going to re-post my most read blog by far, from April 9th 2016. If I knew what there was about this particular blog that made it so popular I would do the same thing again and again. I suppose it must strike a chord with all the old Anglicans still sitting listening to meaningless words through empty services.

In any case, I suspect I shan’t be short of subject matter. Welby’s representative in Rome doesn’t believe in the Resurrection. Welby doesn’t want a lorry park in his Kent back yard. Curry is trying to silence Love. I’m sure I’ll find something to say. “You Cubes” in a Welsh Cathedral-November 2014

When you leave something, whether it’s the Front Bench, a job, a marriage or a church, it may seem to onlookers that you have left after a row. When it becomes clear that it was a relatively small straw that broke the camel’s back, it may be thought that you left in a fit of pique, or on a whim, and that you’re too stubborn or too proud to apologise and return.

In fact, in almost every case, the small straw comes along after months, or years. In my case I came to the conclusion that I must sadly cut my ties to the Church of Wales after a couple of years of increasing frustration, irritation and hopelessness. After a Diocesan Conference in October 2014 which had left me feeling utterly disillusioned, the scales began to fall from my eyes the following month. That’s when I became convinced that the C in W was bumbling along a road I didn’t want to take, to a place I didn’t want to go.

Do you remember these boxes? The trendily labelled You Cubes.

For many years, in our village church, we used to fill old shoe boxes—at Christmas, or for Water Aid, or in response to a disaster like an earthquake. Some boxes were filled with baby clothes, others with small toys, games and crayons, and still others with toiletries—toothbrushes and toothpaste, scented soap, face cream and after shave. (In a crisis it’s important to restore self esteem and nothing does that better than a bit of luxury.)

The boxes in these photos are different. They are empty. Covered with shiny paper and all sorts of bits and bobs, they are supposed to tell the story of individual spiritual journeys. They seemed to me to be a perfect illustration of the saying “Fur coat and no knickers;” the complete antithesis of what our Lord Jesus Christ is all about. The more I looked at them the more I felt shock, puzzlement and finally outrage. Could no one, from Bishops, through Archdeacons, down to Area Deans, see the symbolism of the empty boxes, particularly just a few weeks before Christmas? Did no one in a lowly post in a Diocesan office dare say, what many must have thought, “this is a daft idea”?

These empty boxes summed up what I thought of the Church in Wales. Empty boxes, empty gestures, empty words. An altar of empty boxes. This says it all.

3 thoughts on “We still live in interesting times.”